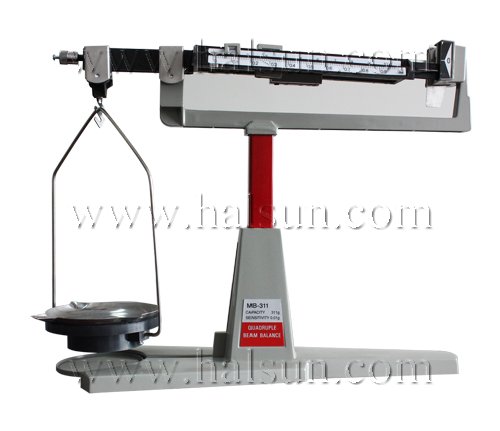 A quadruple-beam balance is a handy laboratory tool to have when you need to weigh small items to a hundredth-gram precision. The beams are horizontal metal rails that hold sliding counterweights, starting with 100 grams and going down to a tenth-gram. The first beam is furthest back from the user; it holds the 100-gram mass, the second is closer, having the 10-gram, and so on. The tenth-gram beam is marked in .01-gram increments. An adjustable weighted screw on the left lets you precisely zero the scale. On the right is a tilting indicator. It’s vertically centered when the scale’s in balance, otherwise it’s over-or under-balanced.

How to Use a Quadruple Beam Balance
Instructions
1 Slide all the masses to the left most position or detent. With nothing in the pan, the indicator on the right should be horizontal, lined up with the mark. If it’s not, adjust the calibration screw on the left until the scale is completely balanced.
2   Add a few coins to the weighing pan. The indicator will tip up, showing that the scale is now under-balanced.
3 Move the largest mass (100g) right, until the scale overbalances with the indicator tipping downward. Then move it to the left one detent to under-balance it again. If the largest mass won’t overbalance the scale, go to the next step. It’s possible the object you’re weighing is too heavy for this scale.
4 Move the next-largest mass (10g) right, detent by detent, till the scale overbalances, as you did in step 3. Then move it to the left one detent.
5 Move the 3rd mass (1g) right, detent by detent, till the scale overbalances. Move it to the left one detent.
6 Move the smallest mass (.1g) carefully to the right until the scale is completely balanced. If all the masses are completely over to the right and the scale is still under-balanced, your object is too heavy for this scale.
7 Add the masses multiplied by the detents to determine the weight of your object. The first detent won’t count. Read the weight on the tenth-gram scale directly. For example, if the 100-gram mass is at its leftmost (first) detent, the 10-gram is at the fifth, the 1-gram is on the 8th, and the tenth-gram reads .56, the weight is (100 x 0) + (10 x 4) + (1 x 7) + .56 = 47.56 grams.
Tips & Warnings
When moving the first, second, and third masses, make sure they go into the detent notches in their respective beams. The fourth mass (.1 gram) may not have a detent.
How to Read a Quadruple Beam Balance
Using an electronic balance may be the easiest way to determine the mass of an object, but it can be beneficial to learn how to measure mass the old-fashioned way: with a beam balance. While triple beam balances are more common, a quadruple beam balance offers more accuracy. In fact, quadruple beam balances are even more accurate than many electronic balances.
Instructions
1        Calibrate the scale to make sure it reads zero when it is empty. Locate the screw adjustment knob and rotate it until the bar points directly to the middle of the balance.
2        Place the object to be weighed on the balance. Adjust the weights until the bar is pointing directly to the middle again. If the bar is pointing up, your current measurement is too low; if it is pointing down, your current measurement is too high.
3        Record the measurements of the largest three rows first. If one reads zero, disregard it. Read the last row, but be sure to take into account significant figures.
4        Add the readings of all four rows together. This is the weight of the object.
Tips & Warnings
For the smallest row, you have to take into account significant figures. You are allowed to take a one-decimal-place guess. For example, if you know it is past 0.13 but it is not quite to 0.14, you can guess that last decimal place.
If you don’t calibrate the scale to begin with, your readings will be off. Take the time to make sure it is set to zero before you weigh your object.

This site uses Akismet to reduce spam. Learn how your comment data is processed.

You Get:
•  4-color printing on high gloss stock
•  Front and back printing
•  High quality pen
•  Choice of blue or black ink
•  More than 16 styles of pull out pen for selection

Why Choose SCROLLPEN.NET?  10 years' professional experience of serving clients worldwide! Since year 2006, we has been supplying customized pull out pen to worldwide clients. Find some of our reference clients here  Promotional Pull Out Pen with Auto-retracting slide out banner.

Banner measures 180*68mm and can be printed on double-sides with your marketing message.